Chinese eCommerce websites seem to Western eyes, too chaotic, too noisy, plenty of links and content saturated. We just need to look to popular Chinese websites such as www.1688.com or www.taobao.com to realize that they have many differences with the webs created in Europe or the US. But, Are Chinese websites so different from American or European sites?

The truth is that so far the Chinese eCommerce websites are very different from Western websites, both in terms of design and content organization, but those who create websites for the Chinese market are realizing that their design is evolving and, day by day, Chinese websites are more like ours; they are cleaner, with fewer elements and are much whiter, such as the work we did for Charles Philip Shanghai. Surely one of the factors that are forcing this “Westernization” of Chinese portals is the emergence of “Responsive Design”. The Responsive Web Design is creating a global standard that almost all designers in the world try to follow. 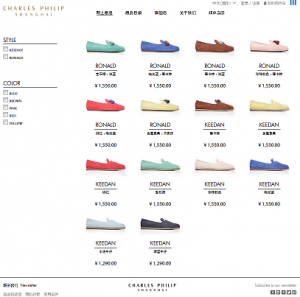 However, despite these recent changes, the reality is that Chinese websites are still very different from western ones and have such unique characteristics as those we summarize below:

First of all, Chinese sites are highly saturated of content, Chinese sites are so saturated that often Westerners perceive them as indecipherable. This is mainly due to the characters in their language. Chinese consumers are accustomed to a very complex typography and have a huge capacity for abstraction, where we see chaos Chinese just see perfectly indexed content.

Information concentrated on the Web home

The Chinese still face many restrictions in the use of internet and the speed of loading web pages is painfully slow, so Chinese website designers offer the greatest number of information on the web home. In this way consumers access to all information quickly, avoiding unnecessary delays and navigation interruptions.

In terms of design, Chinese web pages are heavily influenced by Japanese and Korean animation. For example, as a resource, the Chinese web designers use flash a lot, as was usual a few years ago in Korean web pages. In addition it is estimated that 70% of Chinese Internet users are under 30, so that websites try to captivate these young people through movement, games and entertainment.

The Red color, the top color in the Chinese web design

Another important factor to consider before creating a website or eShop for Chinese market is the colors we want to use and their combination. In China for example the most popular color is red, also known as Chinese red. Recently, our team in Beijing created the Chinese website of Pastas Gallo (http://www.pastasgallochina.com) and we tried to give much prominence to this color because we know it has very positive connotations for Internet users and consumers in that market.

At the same time, Internet users in this country are very picky about colors combinations on a web, for example there are colors that independently work perfectly but combined together are rejected by consumers in the Asian giant. In fact, for example, is not appropriate to use a combination of red with green.

Chinese web pages often incorporate an instant messaging service, such as the popular QQ chat, to cater to Chinese consumers. Chinese consumers prefer this costumer service basically for cultural reasons. Culturally, for a Chinese is hard to say clearly no, so when they no longer want to continue a conversation or decide to decline a purchase simply leave the chat and is interpreted as a no.

4 Key Facts to Shine in the Chinese...

An introduction to Fashion & eCommerce in China

Chinese Daigou Will be Considered Illegal after New...

Big online potential of the cosmetics and beauty...

Why brands are leaving TMall? – The truth...

We promise we won't bother you much :-)

TLG Commerce has been dedicated exclusively to the development and implantation of software for online stores since 1999. We’ve grown by sharing our wealth of knowledge as eCommerce consultants, helping businesses grow up with profitable online strategies, creative designs, advanced technology and fully personalized technical support.

About Us
TLG Commerce has been dedicated exclusively to the development and implantation of software for online stores since 1999. We’ve grown by sharing our wealth of knowledge as eCommerce consultants, helping businesses grow up with profitable online strategies, creative designs, advanced technology and fully personalized technical support.